For a few years I have been working intensively with Chronic Fatigue and Chronic illnesses sufferers. M.E is quite an intriguing syndrome. It is called syndrome because it is not an illness, in the sense of it doesn’t have any specific symptoms you systematically find in all sufferers. Rather a syndrome is an ensemble of symptoms susceptible to be found in those having it. 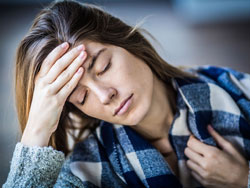 For a few years I have been working intensively with Chronic Fatigue and Chronic illnesses sufferers. M.E is quite an intriguing syndrome. It is called syndrome because it is not an illness, in the sense of it doesn’t have any specific symptoms you systematically find in all sufferers. Rather a syndrome is an ensemble of symptoms susceptible to be found in those having it.

According to the CDC it is very difficult to diagnose M.E and CFS and the causes are generally uncertain. Which generates a lot of anxieties for those who suffer from it, as it is very common for people to have spent ages in doing medical tests and seeing many physicians before finally getting a diagnostic. Not knowing what’s going on or being told at the worst that the tests are negatives therefore there must be nothing wrong with you is highly debilitating and scary. In a lot of situations, patients are simply accused of having depression or any other psychological problem, when it is very obvious that the symptoms are physical and very real. Yes the mind can influence the body hugely and trigger physical illnesses, but denying an illness because its causes might be psychological is never going to help recovering from it.

In any cases, there is an absolutely brilliant tool that has helped many sufferers worldwide for more than a decade now called the Lightning Process. There’s a lot of controversy around it, like most novelties, but as I am not practising it any more I am totally independent and have no personal interest in promoting it. I used to be a practitioner for many years and what I can say is that it is indeed a brilliant process. During the time I was working with it, I saw literally hundreds of clients, and most of them recovered fully from Chronic Fatigue and other similar illnesses.

However there is indeed a small percentage of people who don’t fully recover and need a few follow ups in order to do so, and I have always been very intrigued by the reasons behind this. And I have a few thoughts about it, merely theories, that I’d like to share with you and get your input on.

So M.E and other similar syndromes, such as Chronic pain, Glandular fever, Fibromyalgia are often starting with an initial physical reaction, either a virus, an infection etc. and instead of fully recovering, we get stuck in an ill-like state which is then often diagnosed later as M.E. According to Phil Parker, the creator of the Lightning Process, the reason behind being stuck is a physiological chain reaction caused, among others, by anxiety around the symptoms, that leads to immune system dysfunctions. Which means that when you remove the “stuckness” using the Lightning Process, the cause of the symptoms disappears which leads very quickly to recovery.

But in some cases, there is something deeper behind it all, and when you look at the person in a holistic way, you might discover that on top of that physiological loop reaction, you might find patterns such as emotional trauma, or emotional unbalance that have been going on for a few years previous to developing the symptoms, and which could be the root cause of the illness. The body being really good at expressing emotional blocks could have simply chosen that time to manifest the suffering in that way.

So what I am wondering is if the people who fully recover very quickly “simply” had to break the negative emotion loop at the neurological level  – which is what you do with the Lightning Process – whereas the other ones had to do this AND address in depth the underlying emotional issues that were there in the first place. Which of course would take longer to fully heal. And a lot of sufferers who haven’t got the quick results they were hoping from doing the Lightning Process fall understandably into a negative trap thinking that they might never recover. Where there might be hope for them to engage in a holistic recovery path and also address their deep rooted issues that might have hindered them all their life.

This is merely a theory based on my observation over hundreds of sufferers in the past few years, and I would be happy to hear your thoughts on that and perhaps together we could find the answers that could free thousands of people from this debilitating illness.