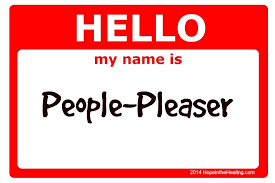 Being a people-pleaser is one of the most common traits I’ve observed around me, whether it’s with my close ones, my colleagues or my clients. So many of us have learnt somehow to become a people-pleaser and we’re not even conscious that’s what we’re doing anymore. And even more worryingly, a lot of people are still not aware it is unhealthy and counter-productive.

So firstly, what does it mean to be a people-pleaser?

I stumbled upon this post recently, and I think Holly describes pretty well the characteristics of people pleasers. In a nutshell, if you struggle to say no, if you are often worried about how people will react to your words or actions, if you do your best to meet everyone’s expectations and try to make everyone around you happy, this is it: you are officially a people-pleaser! The good news is that there are millions of us all around the globe. It’s actually one of the main trait of codependency as I explained previously, and more than 90% of the population is affected. The other good news is that it’s possible to change it.

One of my client recently described her conflicted relationship with her partner, and explained that more often than not, when they have an argument, she ends up understanding his perspective too much and gives in into his demands. Later she feels resentful for having gone along what fundamentally didn’t sit well with her and when I then asked why she did it, she told me:

“It’s like at the beginning of the conversation I’m very clear on what I want, what I think, and where I stand. But as the argument escalates, at some point I just lose myself and I cave in. It’s like I totally understand his point of view, it really makes sense! so I end up agreeing with him. But later on, when I’m on my own, I realise it actually doesn’t work for me, but it’s kind of too late, I’ve already gone along and compromised myself.”

This sense of losing the self I believe is quite fundamental in people-pleasing and more generally in codependency.

On the other end of the spectrum, we find counter-dependent people or in attachment theory language: the avoidant type. People who often run away from emotional intimacy, closeness and commitment. Highly independent, they struggle to form close bonds and allow themselves to connect deeply to others by fear of being engulfed or – interestingly enough – losing themselves. However, when you observe counter-dependent people, their sense of self seems actually very solid and defined.

One of my friend – who is more on the counter-dependent spectrum than on the codependent one – recently described her way of being in a very inspiring manner: she told me that she had learnt to develop a verticality within herself ; meaning that she doesn’t weaver under the pressure of other’s expectations or demands. She stays aligned to her needs and wants, true to herself no matter how others respond.

I think this is a great metaphor for describing that concept of verticality: that capacity to stand tall and unshaken under the tempest of other people’s expectations and demands of us. But does it lead to the big fall the oak experienced in that tale? This is actually a different story that addresses counter-dependency and that we might explore in a further post.

Back to people pleasing, codependency and losing the self, I think this idea of verticality is very useful. As when we experience the loss of self in those relationships, it can sometimes feel like being all over the place, dispersing like ashes in the wind or being dragged along paths that are not who you are, being distracted from your own soul journey. And perhaps one of the way to change is recognising with mindfulness the physical sensation of losing yourself and practise instead through visualisation staying centred and grounded firmly in your roots. Body-oriented practises like yoga or tai chi for example can help you achieve that sense of grounded-ness.

If you’re not too keen on visualisations or can’t connect with the bodily experience of losing yourself, you can work with your thoughts. I asked the client I mentioned previously when was the turning point in that conversation when she went along with his point of view. And through deep investigations we discovered together that when he raised his voice, her inner dialogue went something like “maybe I’m wrong and he’s right?” and this self-doubt was the beginning of her losing herself. She had a profound moment then, realising that she had felt this way since being a child, when her father got angry every time she expressed a different opinion to his.

Self-doubt often reflects a lack in self-belief. If you find yourself often questioning your thoughts, emotions or values when challenged by someone else it is likely the sign that your inner boundaries are shaky. Inner boundaries – in Pia Mellody‘s language – means our sense of who we are (our values, our beliefs, our likes and dislikes) are blurred: we don’t really know for sure what they are ; so it becomes very easy to lose them as they are not solidly anchored in our being. It might then be useful to engage in a self-discovery journey in identifying who you really are, in all those different aspects of your personality, in order to be more confident and more assertive in the face of conflicts and disagreements.

Our people-pleasing pattern is very often learnt in childhood in our original relationships with our parental figures, where we experienced in one way or another being invalidated or criticised for who we were, what we thought or wanted, or when our needs were dismissed or ridiculed. This is not our parents’ fault (in the majority of cases), this is often a combination of a lack of understanding in our culture of how the child mind’s work, how different children’s psychology is of adult’s, and a lack of general education on effective communication. This is probably why sadly, more than 90% of the population still displays codependency behaviours.

So if you – like my client – are more aware of your inner dialogue than bodily sensations, I invite you to catch the turning-point-catch-phrase (such as maybe I’m wrong? what if he’s right?) and using some CBT practise to question those thoughts until you learn to stay grounded in yourself even in the face of disagreements and conflicts.

Finally, I invite you to find the core fear behind losing yourself and pleasing others: are you unconsciously scared they will reject or abandon you? Do you worry about being criticised and ridiculed? Are you avoiding them invalidating you or confirming a deep hidden belief you may have that you are not good enough? I believe that by facing those fears and understand where they come from we can begin to heal deeply and start our journey towards recovery. 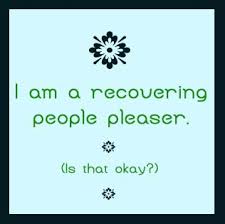 There are some simple strategies you can also implement alongside this deeper work ; such as practising learning to say no at least once a day, or being very clear on what your needs, values and wants are. You can learn some effective communication skills in order to become more assertive without being defensive or aggressive ; and practise developing healthy and clear boundaries. There are more ideas on this blog that can help you to get started. But I believe it’s important to also work on the deep root cause in order to make long lasting changes.

I hope those ideas will be useful to you if you struggle with people pleasing, and as always, feel free to be in touch to share your thoughts and experience!